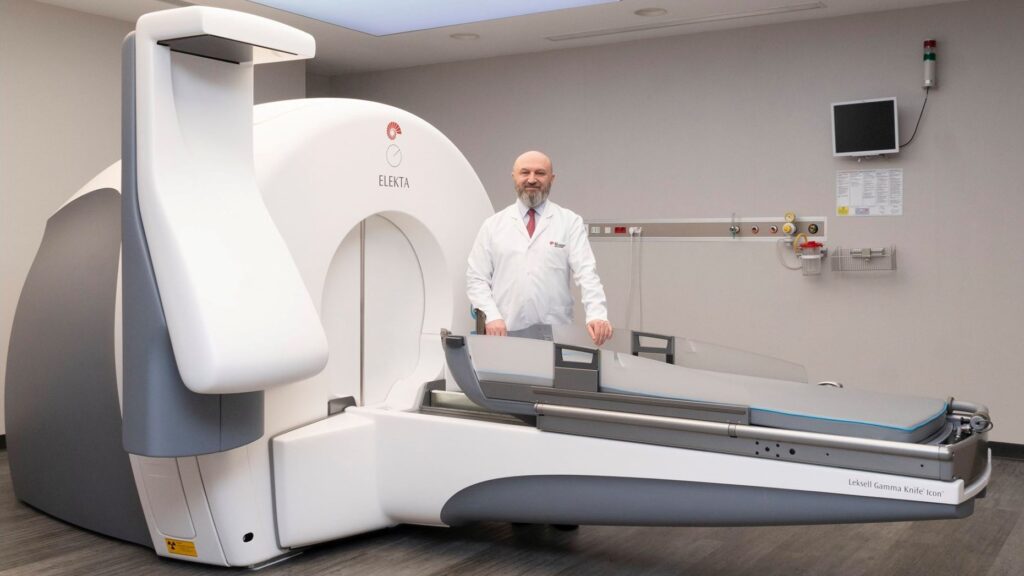 Gamma Knife Radiosurgery is a modality that was discovered by Lars Leksell, a Swiss Neurosurgeon, and gifted to the community of medicine. Although initial developmental efforts date back to 1950s, the Gamma Knife device was first used for treatment in 1968. The first Gamma Knife therapy was performed in 1997 in our country. Gamma Knife Radiosurgery has gradually evolved and now, it offers strikingly successful outcomes in selected patients.

How Does Gamma Knife Radiosurgery Differ From Radiotherapy?

In Gamma Knife Radiosurgery, head of the patient is immobilized with a metallic frame, called stereotactic frame, and the focused radiotherapy is delivered to the intended part of the brain inside the cranium.

Another question about Gamma Knife Radiosurgery is about whether it can be repeated for metastases. For example, a tumor can be treated for the second time 6 months after the tumor is managed with radiosurgery, if a lung cancer spreads to the brain. 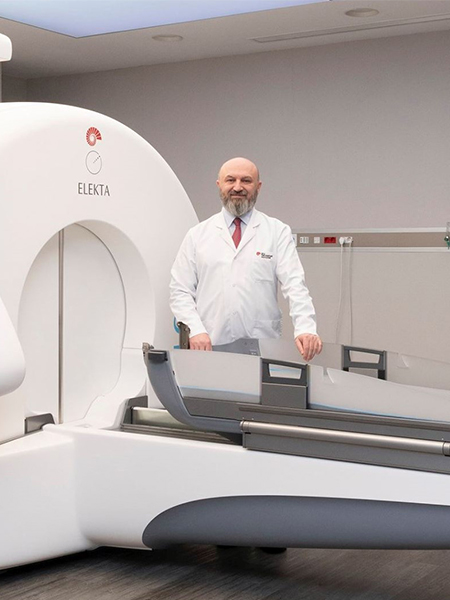 How Does Gamma Knife Radiosurgery Differ From Radiotherapy?

A Gamma Knife team consists of a neurosurgeon, a radiation oncologist, a medical physicist, a technician and a nurse. First, the stereotactic frame is attached to the head under local anesthesia in order to stabilize the cranium. In case of a child, the procedure is carried out under sedation.

MRI is scanned, after the frame is attached, and angiography can also be performed in case of an AVM. A computer software is used to plan the treatment, identify the target and determine the dose of the radiation. After the treatment plan is finalized, the procedure is started in another section, namely the treatment unit.

The procedure takes 10 minutes to 3-4 hours. The duration is dictated by the volume of the lesion and the dose of the radiation. Although Gamma Knife surgery alone (or in other words, it is not combined with other treatment modalities) treats the condition in some patients, a surgery is a must in others, followed by Gamma Knife radiosurgery for postoperative residual tumor.

The patient is periodically followed up after Gamma Knife Radiosurgery. The tumor is checked on once every 2 to 4 months, if Gamma Knife Radiosurgery is performed to manage metastasis. Patients are asked to have an MRI scan once a year in case of benign tumors. Thus, it is possible to check growth of the tumor. A certain period of time is required to witness effects of the therapy, as the radiation needs some time to exert its effects. It may take 2 to 3 months to see those effects for metastases, while it may take several years for a slowly growing benign tumor. Gamma Knife intends to stop the growth of tumor. However, it is necessary to make the abnormal tangle of blood vessels disappear, if Gamma Knife is performed to treat an arteriovenous malformation (AVM). It may be necessary to wait for 2 to 3 years to get this effect.

Gamma Knife Icon offers the option of treatment with a face mask similar to a stereotactic frame or radiotherapy.

What is Gamma Knife Radiosurgery?

Gamma Knife is not a knife in traditional sense. This treatment modality uses a sophisticated technology rather than a knife and delivers gamma rays very precisely to the target zone of the cranium in a single session.

The gamma rays destroy the diseased area in a safe and effective manner similar to a scalpel used in a surgical procedure. However, there are no surgery-related problems, such as bleeding, infection and stay in intensive care unit.

Very tiny beams of gamma ray can be focused on very small areas thanks to the advanced imaging and planning techniques of the Gamma Knife Radiosurgery.

The radiation beams, generated by 192 gamma ray sources, are focused on the diseased area and thus, the nearby health brain tissue is exposed to negligible radiation, while a high dose of radiation is generated at the target. All these procedures are completed within several hours and the patient can be discharged to home on the same day.

What is the origin for the name of Gamma Knife Radiosurgery?

The term “Radiosurgery” is named after Lars Leksell, a Swiss Neurosurgeon.

It implies focusing numerous low-energy (which, therefore, does not cause damage to the brain tissue it passes through) radiation beams on the diseased part of the brain and creating a change in the tissue by generating high energy only at the target.

Gamma Knife device was first used in 1968. Although it was available only in a few centers around the world in the preliminary evolution phase, it gained a wide field of use, after curative benefits were proven. Today, it is used in more than 330 centers worldwide. According to the figures of 2016, more than one million patients with various brain diseases have been treated with Gamma Knife.

Although LINAC systems, such as X-Knife and CyberKnife, are also used to irradiate brain pathologies, there is no device yet that has reached the precision of Gamma Knife. Moreover, other devices also drop behind in terms of case experience.

The basic principle of Gamma Knife surgery is to determine the diseased area digitally (using a software) after the head is stabilized with a stereotactic frame and to deliver many (192-201) gamma rays generated by Cobalt source to the target. Healthy brain tissues are not damaged, as the radiation beams emitted by each source have low energy; on the other hand, a potent radiation effect is observed at the location, where all beams are focused.

Gamma Knife can be used for AVMs, brain tumors and functional diseases. It provides the patients with an option of blood- and scalpel-free treatment. The intensive care need is eliminated and the treatment takes only several hours. Most patients can resume routine activities of daily life in the next day after the treatment.
Today, most of patients look for relatively simple treatments to get rid of their diseases. Medical investigations are intensely conducted to meet this request. Gamma Knife fulfills this need, as it is a non-invasive treatment modality.

Is it also an option for elderly patients with systemic health problems?

When can I resume my routine daily life?

You may return to your daily life immediately after the treatment. The pre-treatment restrictions, if any, do apply without any modification. Gamma Knife Radiosurgery does not require a specific restriction.

Is haircut necessary for this therapy?

No. Haircut is not required for this procedure.

When do effects of the treatment appear?

The effects of Gamma Knife Radiosurgery can be seen in varying intervals, ranging from several months to several years. This interval varies in each disease. Patients should have certain examinations, such as MRI and Angiography, at intervals recommended by their doctors in the follow-up. Gamma Knife Radiosurgery intends to control growth of the tumor – no increase in size of tumor or shrinkage of the tumor.

What will I feel during Gamma Knife Radiosurgery?

You may feel a very mild pain while the stereotactic frame is attached to your head. Local anesthetic agents are used to minimize this condition. Attachment of the frame causes a feeling of pressure, but it disappears in several minutes. Patients do not feel any pain during the treatment. It is not possible to see or feel the radiation.

Are Patients Awake During Treatment?

Yes, patients are awake in this procedure. However, sedative agents can be considered for excited patients. Your doctor may talk to you through a speaker and microphone during your treatment.

Gamma Knife Radiosurgery is a non-invasive neurosurgical method that affects the diseased tissue very accurately with gamma rays. It is not associated with potential complications of open surgeries, such as bleeding and infection. Since hospitalization is not required, resultant problems are not faced. The risk of reaction in the healthy tissue secondary to the radiation energy is about 1 to 2 percent. Most of them are also transient.

How should you prefer your Gamma Knife Radiosurgery center?

Book an appointment to talk with Prof. Selçuk Peker, M.D. about your treatment plan.

Get In Touch With Doctor

Book an appointment, get a quote, or schedule an online consultation.